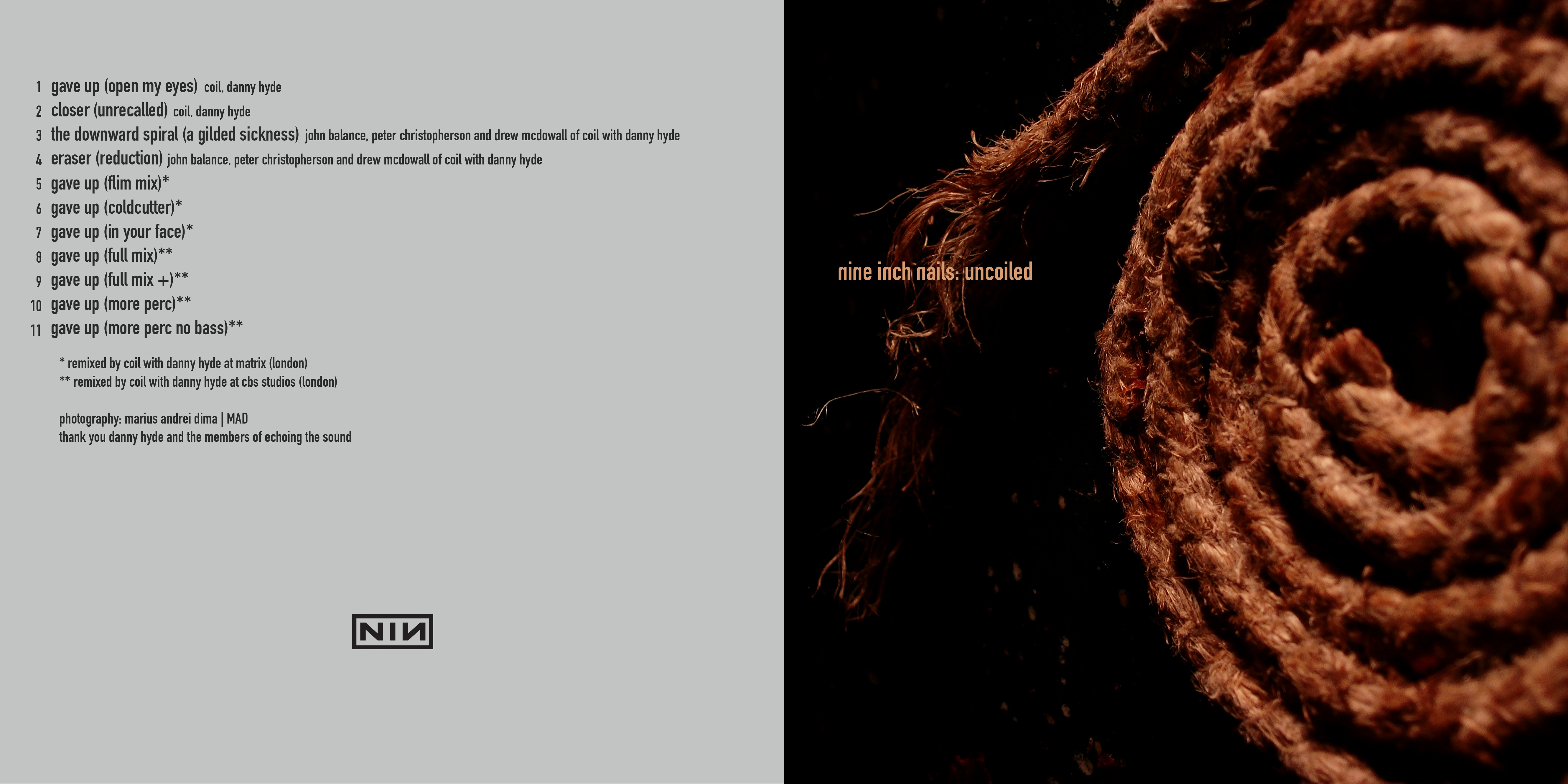 Artist: Nine Inch Nails
Album: Uncoiled
Edition: Extended
Notes: This is the longer version released via EchoingTheSound.org with permission of Danny Hyde of Coil. Danny Hyde is the only member of Coil alive at the time of release, so it makes sense his sanction of the sharing of these remixes is fairly permitted. A readme.txt is included with the download where I snatched it (what.cd).
Readme.txt:
Uncoiled Extended (12/22/2012)-
Over 50 members from echoingthesound.org helped make the original Uncoiled possible. This extended edition is for those members. The extended edition contains tracks that were not included on the original Uncoiled release. Those tracks are as follows:
01 - This is the opening commentary from Danny Hyde.
02 - This is the original version of Gave Up (open my eyes) as Danny intended it to sound. On the initial release of Uncoiled, we incorrectly adjusted the sample rate. This caused the song to play faster than Danny intended.
06 - Closer (demo) with commentary
07 - Additional commentary from Danny Hyde on the following Gave Up remixes
Uncoiled (11/03/2012)-
On February 21, 1995, Stephanie Nahas posted to alt.music.nin about meeting up with Danny Lohner, who mentioned at the time that Coil had remixed Eraser for an upcoming remix album. Sometime in the next few months, someone with reliable contacts with the Coil and NIN camps let on that several remixes were completed by Coil, but not all of them made the remix album. The Nine Inch Nails discography was updated to add the following tracks to "NIN PHANTOM SONGS"
Eraser (a version with worms)
The Downward Spiral (a gilded sickness)
The Downward Spiral (fullblown)
These were added a few lines below this existing entry:
Gave Up(remix by coil, used in movie Young Americans, faster than fixed version and uses the same sound template according to John Balance of Coil. fixed version appears on soundtrack)
Over the years, NIN fans helped dig up tracks on that PHANTOM NIN SONGS list, but these proved elusive. Peter Christopherson was asked in 2007 about any unreleased remixes for the launch of remix.nin.com:
"Thanks for writing and listening over the years, but sorry - to the best of my recollection everything we did was already used by Trent in public, except the Broken Movie, which I understand is available from some pirate.com type sites."
With the passing of John Balance and Peter Christopherson, I took the rumors of those remixes of The Downward Spiral and Eraser to be figments of the creative imagination of someone on alt.music.nin - as to the remix of Gave Up that appeared in Young Americans, that concretely existed. In 2012, longtime Echoing the Sound forum member Wizfan, hailing from Greece, contacted Danny Hyde:
"I had seen a YouTube video of yours a couple of years ago. You showed a box with the Nothing logo on it. Do you still have it? Could you tell us about it? We are interested in unreleased songs/remixes by Coil, NIN or other artists."
The response he got was pretty exciting -
"sure i have many unreleased versions of Gave up and closer, mixes created on the days but different and unheard even by trent
I also have versions of the downward spiral and eraser mixes on a dat somewhere"
Eight months later, with the help of over fifty members of EchoingTheSound.org, remixes that have sat on DATs - some for over two decades - are now available for you to enjoy.
Special thanks to Wizfan for getting the ball rolling, to David D. Yuhnke for chasing down all the other phantom NIN tracks, Marius Andrei Dima for coming up with photography in very short order, and Danny Hyde for making this possible.